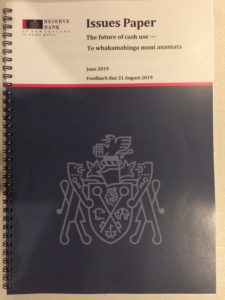 On 19 June 2019 the Reserve Bank of New Zealand (RBNZ) released an Issues Paper on the future of cash use. On the same day RBNZ invited a group of NGO representatives, including DIAA, to meet for a discussion on the challenges people are likely to face if cash becomes harder to get, or to spend, as electronic and online payments take over.  We have already seen some retailers and banks signal the demise of cheques, so could this happen to cash as well?

The team at RBNZ were quick to reassure us that cash is likely to be around for some time, as no country in the world has yet gone cashless. But there are indications that the overhead costs of managing a cash system are going to continue to create a tension for retailers and banks.  With declining quantities of cash being used for day-to-day transactions, businesses are going to face increasing pressure to promote electronic and online options.  For today at least, the overhead costs associated with cash systems are invisible to the consumer, in contrast to many electronic transactions, such as credit cards which incur an additional charge.  But flip this around, and make the cost of electronic transactions less than the price of cash.  Or what if a business decides to stop accepting cash?  Some countries are now developing legislation to prevent this occurring.

So what does this have to do with digital inclusion? RBNZ has recognised that people who are digitally and financially excluded could be severely affected by the disappearance of cash.  Specifically, RBNZ has identified the people most likely to be negatively impacted as the same digitally excluded groups as those identified in the Pulse of our Nation report and the Government’s recently released Digital Inclusion Blueprint, i.e. people with disabilities, senior citizens, people with low socio-economic status, Pasifika and Māori, people in rural communities.

So, what to do?  We could fight it (the shift towards a cashless society) or we could help people understand the benefits.  Our Alliance is about the latter; let’s help everyone enjoy the benefits.  But you may not agree, so do have your say by completing the online survey here.  Feedback is invited until 31 August 2019.