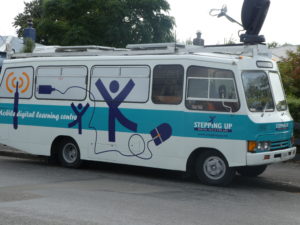 A few weeks ago, DORA, our mobile learning centre returned to Wellington for her Certificate of Fitness check after a successful deployment with Digital Seniors in the Wairarapa.  She will be deployed in Porirua for the next few months and then move on to her next assignment.

DORA is a fully self-contained digital learning centre.  All the electronics – onboard computers, internet connectivity, TV monitor and heating system are all powered by a battery bank which in turn is charged by roof-mounted solar panels.   Internet is provided by 3G or 4G wireless connections.  In more remote areas, internet is provided by a Farmside satellite connection.  And if the sun doesn’t shine enough to charge the batteries we have an on board petrol generator.

We have received expressions of interest from five regions to host DORA for a term.  The tentative plan is as follows: